“I cannot lead you into battle. I do not give you laws or administer justice but I can do something else – I can give my heart and my devotion to these old islands and to all the peoples of our brotherhood of nations.”

To celebrate this remarkable and momentous achievement and inspired by the Queen's words highlighted above, The Oriental Rug Gallery Ltd wished to pay tribute to Her Majesty, by creating a hand-crafted  piece as a symbolic portrayal of "...these old islands and the peoples of our brotherhood of nations" , while demonstrating its rug passion and portraying traditional woven skills in a multi-layered decorative, artisan approach.

The Union Jack was specifically chosen as the celebratory symbol of the British Realms that Her Majesty governs, which, when crafted, would form the centre piece of a Rug Gallery window display that had taken many weeks’ of meticulous planning and designing to produce and complete.

First, Sandre assessed the measurements for the component St George, St Andrew and St Patrick overlays that make up the Union Jack, where specific calculations were needed to encompass the slight pin-wheeling of these three crosses, known technically as ‘the counter-change of satires’, and to ensure the Union Jack flag would be designed the correct way up.

Next, she drafted an initial template, so that the requisite 3-2-1 measurement of rule – for the red and white interchanges could be scaled up to the correct width and size for the design. By colour-matching the Union Jack Flag’s tricolours, Sandre also ensured that the correct CMYK specifications would be used in the hand-crafted design.

Anas decided to incorporate The Oriental Rug Gallery Ltd’s traditional, bespoke-made rug peg-loom into the design – originally constructed and then used as the foundation to craft the Haslemere Coat of Arms Rug Weaving and our St George Flag Weave creations. In this incarnation, the loom would be used as the main frame support for the Union Jack wool weave structure, which was to crafted onto it.

Next, Anas and his brother Mo – the Rug Gallery’s fourth-generation Master Rug Craftsmen, began the complicated procedure of transferring the template 3-2-1 measurements of rule to the loom frame, in preparation for the wool yarn conveying the diagonal red and white stripes of the satires. Now the wool could be ‘spun out’ and attached in a series of layered weaves across the loom frame.

Now Anas and Mo were ready to begin the hand-crafting process. Here, they blended the Rug Gallery’s madder-root red and natural white wool yarns into a series of interlinked lattice weaves to form a series of interconnecting layers within the design.

With Sandre on hand, Anas ensured the weave tension of the Union Jack design remained even throughout the multi layering and weave-crafting processes onto the wooden frame.

Meanwhile, a series of four serif-cut wooden letters conveying Her Majesty’s ER monogram were also being incorporated into the design. First, Sandre primed the letters in acrylic paint. The next day, once dry, she hand-guilded each letter in gold lacquer and left them to dry overnight.

After Anas and Mo had completed the layered red and white yarn lattice-weaving, Sandre helped them attach the chosen material, forming the blue background for their Union Flag creation, to the loom frame.

Once the the Union Jack design was complete, the wooden loom frame was measured, so that  a gilded surround could be constructed and overlaid on top, to form a gold frame and complete the design.

Next, Sandre designed a series of three visual design layouts set in gold frames to be displayed below the Union Jack creation. These included: Her Majesty’s Coronation in 1953 marking the beginning of her reign, decorated with gold embellishments: highlights of the Honorary Presentation of The Oriental Rug Gallery Ltd’s Diamond Jubilee Embroidery Gift for the Queen in 2012 and now on permanent display at Haslemere Town Hall; and the Personal Royal Thank You Letter received from Her Majesty the Queen – detailing her joy for the Gift, also proudly on display.

As the Matriarch of the Moment and a leading Woman of our Time, The Oriental Rug Gallery Ltd wish Her Majesty a continued long and successful reign “over these old islands” and “the peoples of our brotherhood of nations”. 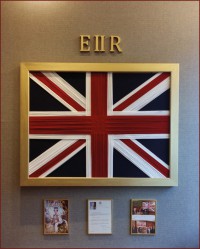 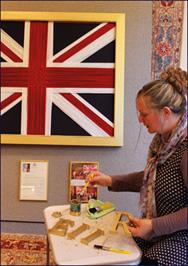 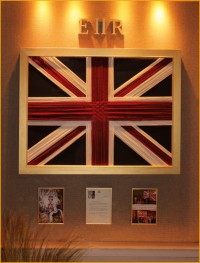